Tim Wise goes in, and drops mic on way out!

Must read article by Tim Wise. It’s lengthy, but worth the read. It’s very direct and speaks to the core of the problem with Jim Crow Benefactors sitting on a high-horse preaching to blacks about violence, change, etc.

Anti-racist scholar Tim Wise: White America is oblivious — and they want to keep it that way

One important excerpt that stands out:

I beg to remind you, George Washington was not a practitioner of passive resistance. Neither the early colonists nor the nation’s founders fit within the Gandhian tradition. There were no sit-ins at King George’s palace, no horseback freedom rides to affect change. There were just guns, lots and lots of guns.

We are here because of blood, and mostly that of others; here because of our insatiable and rapacious desire to take by force the land and labor of those others. We are the last people on Earth with a right to ruminate upon the superior morality of peaceful protest. We have never believed in it and rarely practiced it. Rather, we have always taken what we desire, and when denied it we have turned to means utterly genocidal to make it so.

Which is why it always strikes me as precious the way so many white Americans insist (as if preening for a morality contest of some sorts) that “we don’t burn down our own neighborhoods when we get angry.”

Wise does go on to discuss riots after sporting events, whether or not the rioters’ team wins or loses. But Wise misses the mark with these two significant riots in which neighborhoods WERE burned down by white Americans.

Harvey E. Clark Jr.
A black World War II Veteran rioted out of his home by whites who refused to live with or near blacks and then building burned down to make sure no other blacks were rented to. Not one rioter was indicted but instead the building owner was indicted for inciting a riot (renting to blacks).

1921 Tulsa, Oklahoma Race Riot
Largest race riot in history. A wealthy black neighborhood (built from scratch without help of anyone but themselves, which speaks directly to that constant chant from Jim Crow Benefactors, “why can’t you do for yourselves and stop asking us for money?”, i.e., “welfare”). The entire neighborhood was destroyed by Jim Crow Benefactors with arms and ammunitions happily provided to rioters by the NRA. 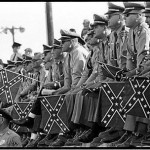